In one scene, she’s in a short red sleeveless glitter dress, knees kissing the ground with hands outstretched, face to the heavens, a lone candle surrounded by other objects sit on the floor. We will call this scene 1.

In another scene, she’s naked, one hand clutching on to a few strands of braided hair, the other hand holding a knife to the braids with a determined expression. We will call this, scene 2.

In a third scene she’s in a longer red dress, knees bowed down with arms clasped against each other as if in prayer, bits of cut braids adorn the floor. In all three scenes, a partitioned projection of a white man in a suit is splayed on the wall behind her. These are scenes from Crazinist artist aka Va-Bene Elikem Fiatsi’s 2019 performance – “Ritual reALITies”

Va-Bene’s description of Ritual reALITies is that “it explores the politics of identity as a collaborative ritual between an individual and their communities. It questions the fate of trans bodies, queer citizens, non-binaries etc at international borders”

Rituals tend to be performative routines which are often learnt or borrowed. According to hipdict, tradition (which is a synonym of ritual) is peer pressure from dead people.

Although I did not have the privilege of experiencing this live performance, the documented imagery tells an undaunted story.

In scene one, it is as if to pray to a god you do not entirely believe hears you, but you still question, hoping for an answer – father this is who I am, this is how I became, all sparkle, neither woman, neither man, both man, both woman. Does my existence come with a siren announcing my validity before I receive acceptance? 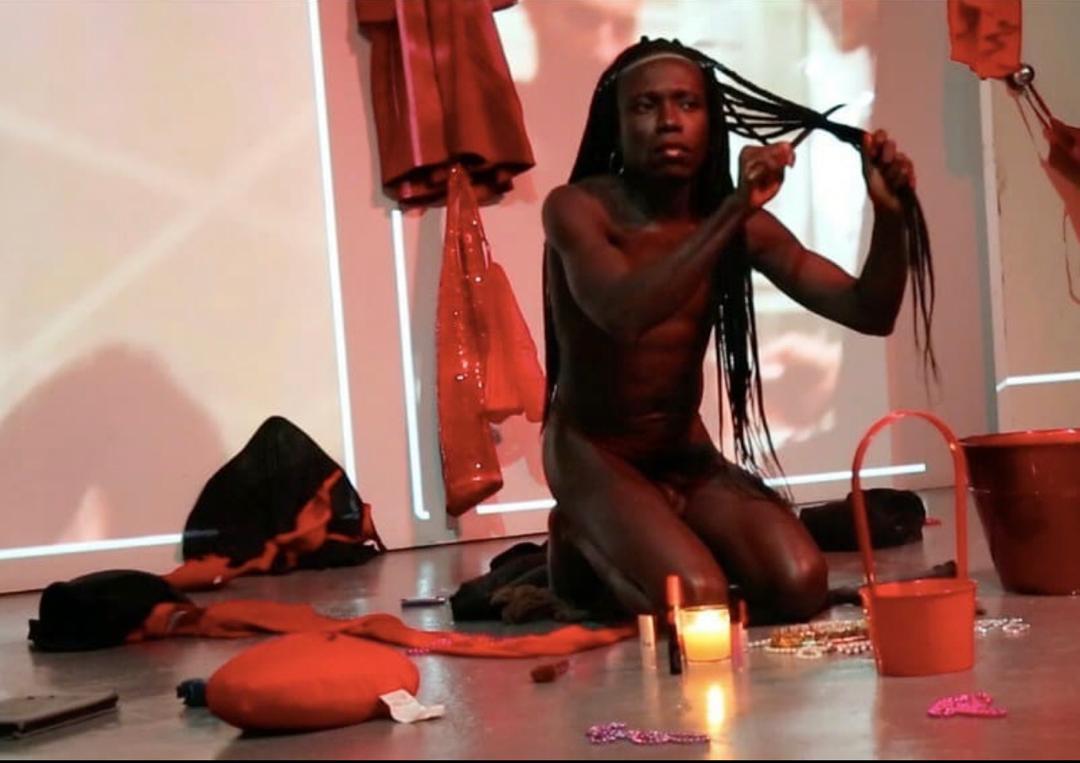 Scene 2 is defiant and relentless –says to all who will listen – that if they ought to fold into your fixed forms to be called one of you, then they rid themself of this label. They strip and peel and toss and cut with abandon. They will not be folded and laid out to be hanged dry.

Scene 3 is calmer but focused. Poised for claiming space, however hard and long it takes. Clothed for ease, here to stay.

What I infer from Ritual reALITies is that, – if identity is a result of a collaborative ritual between individuals and their communities, a re-visitation of rituals (whether it is to chop off, chip in, add on, create another) shouldn’t be labourious.

It reminds me of Drag performer & writer Amrou Al-Kadhi’s use of the theory of quantum physics to explain gender. “If subatomic particles defy constructs all the time, why should we believe in fixed constructs of gender or any kind of reality?”

Even the smallest units diverge, why can’t the whole?

Lit and black is a product of Black Girls Glow, we’re building community for women artists to create and collaborate. You can learn more at blackgirlsglow.org. If you’d like to support us please go to our patreon, there’s different levels and you can support at a level as low as $1. Thank you, and support black women artists.

Processing…
Success! You're on the list.
Whoops! There was an error and we couldn't process your subscription. Please reload the page and try again.